A drama of human progress: the stage is set

“If we don’t address conflict and fragility we stand no chance of eradicating poverty by 2030”.

“Without peace and stability it is just not possible to build institutions or achieve economic development”.

“we chose to unite the people ahead of any other target; nothing else was possible without that.”

Three voices which sound like they come from a peacebuilding NGO’s advocate in one of the many meetings during this week’s lobby-fest in New York at the UN General Assembly. Yet these were the words of Helen Clark, Administrator of the United Nations Development Programme, Minister of Foreign Affairs Gutierrez of East Timor and a Ministry of Development spokesperson from Rwanda. Their point, echoed by many of the poorest and richest states alike this week, was that good governance is basic good development: not a niche concern. And without it, there is no chance of realising a vision of a world without extreme poverty.

So here were conclusions based on evidence, experience and what local people themselves had said very clearly in the many consultations to date. It was summarised by former High Level Panel member John Podesta:

"We know that without strong and accountable institutions, development just doesn't work over the long run ... there is increasing recognition that we need to get things like institutions and transparency right as part of the post 2015 agenda."

To add to the feel good factor for those of us advocating this holistic vision of human progress, where the rule of law and human rights are considered as essential building blocks of all nation states, we saw the Outcome Document agreed by the General Assembly, which was equally clear about the integral nature of political as well as social and economic ambitions.

But. This week was also marked for me by the slow but clear emergence of the spoilers. Having kept their heads down thus far, amid the fanfare of the High Level Panel and the numerous “global conversation” consultations through which people at the grassroots said loudly and clearly that they too viewed a future in which they could play a meaningful role, this week saw the inevitable pushback begin.

John Ashe, the new President of the General Assembly, launched a unique hybrid body called the High Level Political Forum which was agreed at the Rio+20 conference. Among the roles of the Forum is to:

In so doing it will meet at Ministerial level every year with each resulting in a negotiated declaration. The Forum is thus emerging as the key centre of power which will take on added importance as the Open Working Group concludes its business in September 2014. In other words, this is where the deal will be done in 2015. It's important. Worrying, then, that Mr Ashe described the Forum as starting from a “clean slate” and that the Outcome Document dismissed all of that bottom-up consultation as just a “useful input”. This week also saw several other members of the G77 group of developing countries voicing scepticism and even outright opposition to the idea of including anything related to governance, justice or peace in the next incarnation of a global development agenda. And that reference to peace and stability in the Outcome Document? It was taken out and then negotiated back in again at the last minute. Here's what some members of the G77 found grossly offensive and tried to remove:

"[The post 2015 framework should] ... promote peace and security, democratic governance, the rule of law, gender equality and human rights for all."

Outrageous I think you'll agree. To me it's redolent of how the inspirational vision of a world in which everyone had a stake enshrined in the Millennium Declaration was eventually negotiated down to a set of targets that bore little or no relation to those ideals and predictably did little for the poorest as a result. 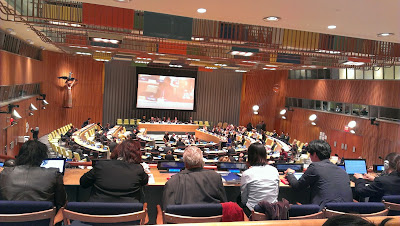 Thus, just when you thought it might be safe to start looking forward to a holistic global approach to development, the stage is set for at least two more acts of high drama and even higher stakes. In Act II the Open Working Group will debate in December the needs of LDCs and countries in “special situations”, governance and human rights before convening in February to talk directly about conflict, rule of law and equality. In parallel the African Union will consider the implications of the New Deal for Engagement in Fragile States, a way of doing development that places the relationship between citizens and their governments at the core, and the General Assembly under the stewardship of John Ashe will stage a series of thematic debates, including one on conflict, before the Open Working Group finally present the report of their deliberations to the Secretary General in September 2014.

Act III of the drama will therefore likely centre on the High Level Political Forum, and many predict will be the least likely to involve civil society. This is despite the claims made in the UN's own video above. And there is the rub. At almost every one of the many meetings I took part in this week we were told by Heads of State, senior UN officials and others that the voice of civil society, the views of people themselves, were critical. But this was usually followed by a formal set of statements on the floor of the General Assembly from Governments that seemed to bear little resemblance to the key findings already established: not just that communities themselves wanted clear political rights and protections but that the evidence illustrated you simply could not achieve even narrowly defined technical objectives without adequately addressing inequality, injustice and people’s views. Thus the challenge for progressive voices, it seems to me, is both global and local. Globally civil society in all its forms needs to hold these intergovernmental actors to account and keep the drama on the main stage, lit up for all to see. That means attending and observing meetings, putting on their own events and reporting the discussions widely. When I challenged an official working on the High Level Political Forum for 2014 this week about what a “clean slate” meant, he immediately started to backtrack, emphasising how they would learn from what people had already told decision makers through the consultations after all. Public pressure works and the international system feels obliged to respond when the spotlight is shining.

Local, however, is the real key here. Outside of the vortex of New York, which seems to be populated by elites from permanent missions, NGOs and business folk who somehow navigate the labyrinthine combination of meetings, acronyms and processes; national governments need to be held to account by their own populations for what their representatives are saying on their behalf. It becomes all the harder for recalcitrant governments to claim that all of this rights, justice and peace stuff is a Northern inspired agenda (which many do) when their own people are vocally, visibly and volubly making the same case. At the end of this week I am left with a sense of hope that the very clear message local people expressed for a development agenda that was based on open government, transparency, rule of law and justice has been protected for the next stage of the drama ahead. As one permanent representative of a conflict scarred country emphatically told me - "it's in the Outcome Document. And they're not taking it out again."

The first pushback failed. But that the pushback has begun is beyond doubt. The stage is set, and the stakes are high.