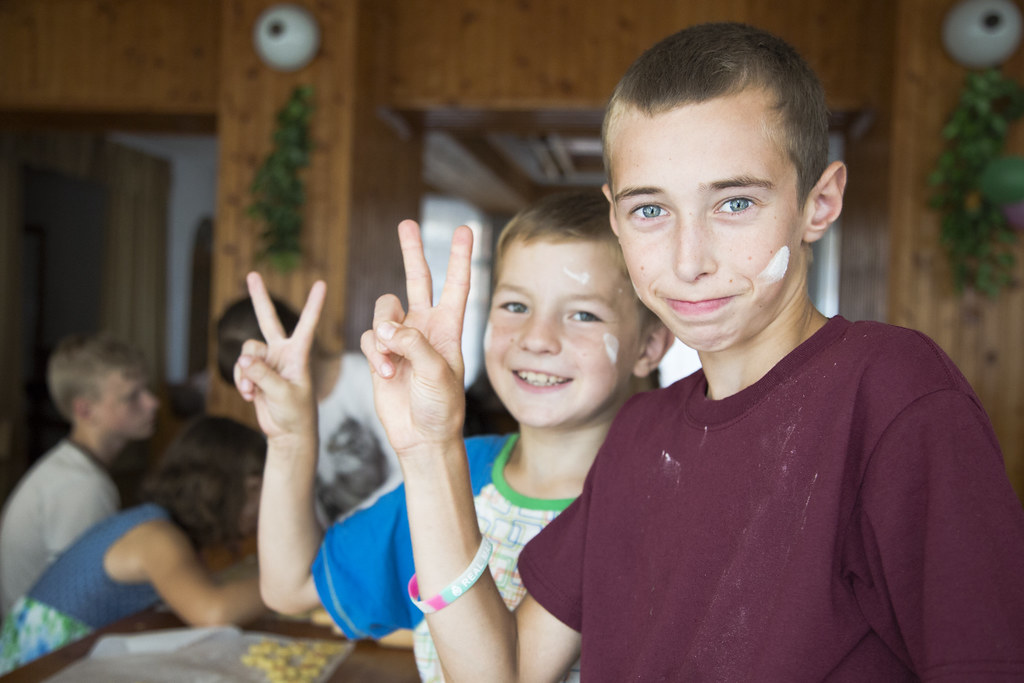 The consequences of today’s ongoing conflicts require both emergency and long-term humanitarian support. The international community pours vast sums of money into covering the basic needs of the people affected.

This support for basic needs, however, does not necessarily address the conflicts that are the very sources of humanitarian disasters and emergency needs. Even having escaped the horrors of war, people remain caught up in these conflicts, and may influence them. Refugees and internally displaced persons (IDPs) become the bearers of messages about the conflict, taking the conflict with them to their new places of residence.

At this stage, the conflict enters a new phase and assumes a life of its own. For those who have been displaced, the complex processes of adaptation and integration often gives rise to a new enemy image. Meanwhile, the old enemy that remains behind the frontline, may fade into the distance.

International Alert’s programme in Ukraine, in partnership with the European Union, focuses on three strands:

While the initial focus of the programme was on working with adults, we also decided there was no reason we could not do this with children. Children, after all, do not choose war. They do not start wars. We adults present them with wars, without even considering how far, or how deep, their consequences are likely to extend.

Just recently, Ukraine has begun to see some nascent social demand for dialogue. The prevailing social discourse, sadly though, is still that the main priority is to teach young people to defend themselves, and that conversations about peace can come later. Many Ukrainian children are subjected to elements of so-called military patriotic education, such as summer camps, which are more likely to block opportunities for future conflict transformation.

In the summer of 2016, International Alert, together with local partners organised 25 camps for 2,000 children with a totally different approach, that of peacebuilding. Our aim was to give children back their childhood, to strengthen their natural coping mechanisms, and to give them an understanding of how a more peaceful future might be possible.The children selected for the camps came from a wide spread of social backgrounds, and with different degrees of being affected by the conflict.

Some of the circumstances we encountered were shocking, even to us. Parents from areas where there was fighting would not let their young children attend the camps, whereas they would willingly send their older children. Later, we found out that the parents were afraid they themselves might perish under bombardment while their children were away. They felt the older children would have a better chance to survive without parents, whereas the younger ones would have no-one to look after them. In this situation, they hypothetically chose for their younger children to die with them, should it come to the worst.

War does not merely destroy people, animals and buildings. It also shatters our social and family roles and functions. Seeing their fathers’ and mothers’ powerlessness in the face of bombing and shelling, children unconsciously start to take responsibility for the situation on themselves.

Later, when they realise that they too are powerless to do anything about the madness of war, they start to wonder ‘why am I so bad?’. They then conclude that ‘I am incapable of anything’. Without timely psychological and socio-pedagogical correction, such trauma is extremely dangerous and risks bringing about all kinds of unforeseeable consequences in the future.A practice widely used in our camps involved visits to lonely elderly people. The children would offer them support, for example, by baking them biscuits, chatting and cleaning up their yard.

This type of activity gives children a positive experience, a feeling that they can ‘rescue’ someone, and the sense that they can make a difference. These elderly people had been children themselves during World War Two. It is a sad paradox that ‘lessons learned’ from that period are now being shared in this way, with these completely different generations sharing a similar experience of war, bringing them closer and making them feel supported.

In one of the camps, the children literally saved the lives of some retired police horses that had been sent to the butchers for slaughter. The camp was able to buy the horses, and with the aid of a local volunteer vet, the children nursed them back to health.

Unable to cope with the burden and consequences of war, some children start to recreate their own wars, for instance, by cruelly tormenting their peers. In this way, they bring into their own circle the war in which they cannot participate because of their age. Their wars have their own rules, victims and heroes -indeed, almost the same as in ‘grown-up’ war. If special rehabilitation programmes are not organised in time, these children will very soon be ready for the real war, and will find themselves subconsciously seeking and inviting it.

The trauma of armed conflict is dehumanising. The precarious life of IDPs and the often heard accusations towards people from the east of Ukraine as ‘perpetrators’ and of ‘inviting Putin into Ukraine’ (because of their predominantly Russian ethnicity) is also dehumanising, in particular for children. Different people cope with this in different ways. One young girl at one of the camps complained of various severe illnesses which helped her to feel special and to draw attention. Her family, it transpired, had been forced to move seven times in the course of one year

Armed conflict gives rise to an endless range of problems, questions and needs, requiring decades of work, which has come to be seen as needing to be delivered in successive stages. Instead, we need to see different types of assistance being delivered concurrently.

For humanitarian aid to be effective, it need not only to meet people’s most basic needs but also to enable a painless process of adaptation and integration for the displaced and host populations alike.

Aid packages should include peacebuilding components that can facilitate this and at the same time work on attitudes around the conflict, building potential for its transformation in the future.

The peace education camps will resume in the summer of 2017.

What’s next for veterans in Ukraine?